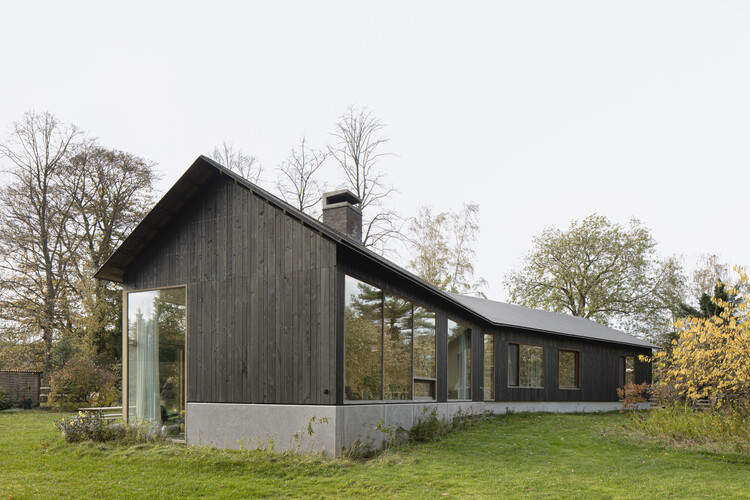 Text description provided by the architects. The ‘B’ in the name of this house stands for Basile, architect, and co-founder of Graux & Baeyens Architects. He and his wife were charmed by a 1965 chalet-style house in Destelbergen (Ghent, Belgium). And although it was too small for their family, Basile – how could it be otherwise – immediately saw opportunities to make it their home.

Creating spaciousness. The intimacy of a house in the second building line, the view on the parking area of a castle domain, and grazing fields with Shetland ponies… these were all advantages that persuaded Basile, the client, to choose this spot. The architect in him was triggered by the solid structure, interesting layout and pitched-roof typology of the house. He absolutely wanted to avoid a clash between old and new, and so the basic idea was born for a harmonious extension of the existing structure. The new entrance hall forms the pivotal part between the existing and the new construction.

The existing part, the night wing, became a more introverted area; the extension a generous, light-filled day wing. The new building makes a slight rotation in relation to the old structure, optimising the incidence of light inside and creating a lovely garden room on the south side and a deeper perspective/vista towards the trees of the castle domain. For GBA architecture is defined by the abstract boundary between interior and exterior.

Introverted night wing. The DNA of the existing structure remained intact. Thus, 95% of the original structure was preserved. The low ceilings, original window openings, and small doors, for example, contribute to the intimate atmosphere of the rooms. What is new is a straight corridor, which runs like an artery to the new construction and gives the flow and lines of sight from the old wing a completely different dimension. The corridor is 1.40 metres wide, forming a generous multipurpose area where children can play with their blocks or ride their balance bikes. At the end of the corridor, a new window forms the perfect frame for the neighbour’s paddock, an imperfect but so authentic picture that the architect absolutely wanted to integrate it into his design.

Generous daylight wing. The transition from the old to the new construction follows the natural undulation of the landscape. From old to new, the structure gradually sinks closer to the ground line. This gives rise to very different spatial realities within the two structures. In contrast to the withdrawn character of the old wing, the openness of the day wing is contrasted up to the ridge of the gable roof, with large ceiling-high windows that perfectly frame the surroundings. Thus, softly filtered morning light enters the living kitchen and the residents have a beautiful view of the high treetops of the castle grounds behind them from their dining table.

The concrete plinth, which on the outside bridges the slope of the landscape, creates a wide bench in the living room where guests can spontaneously flatten themselves. In this way, the relatively compact family-sized living room can also simply accommodate more people. The entire house, incidentally, is punctuated with these kinds of undefined spaces that take on their own meaning over time. The concrete plinth continues in the window frames, in the steps between the various rooms, and finally forms the kitchen tablet at working height in the kitchen.

A fireplace was placed between the spaces, which on the one hand creates intimacy in the living room and on the other hand accentuates the openness of the kitchen as a centre piece. Throughout the house, much attention was paid to the sense of scale: despite the high windows in the kitchen, for example, the sliding window remained on a human scale and the residents can easily reach a small ventilation window. The interior is finished with raw concrete, loam and terrazzo floors: natural materials in a soft colour palette, which at the same time radiate certain robustness and imperfection.