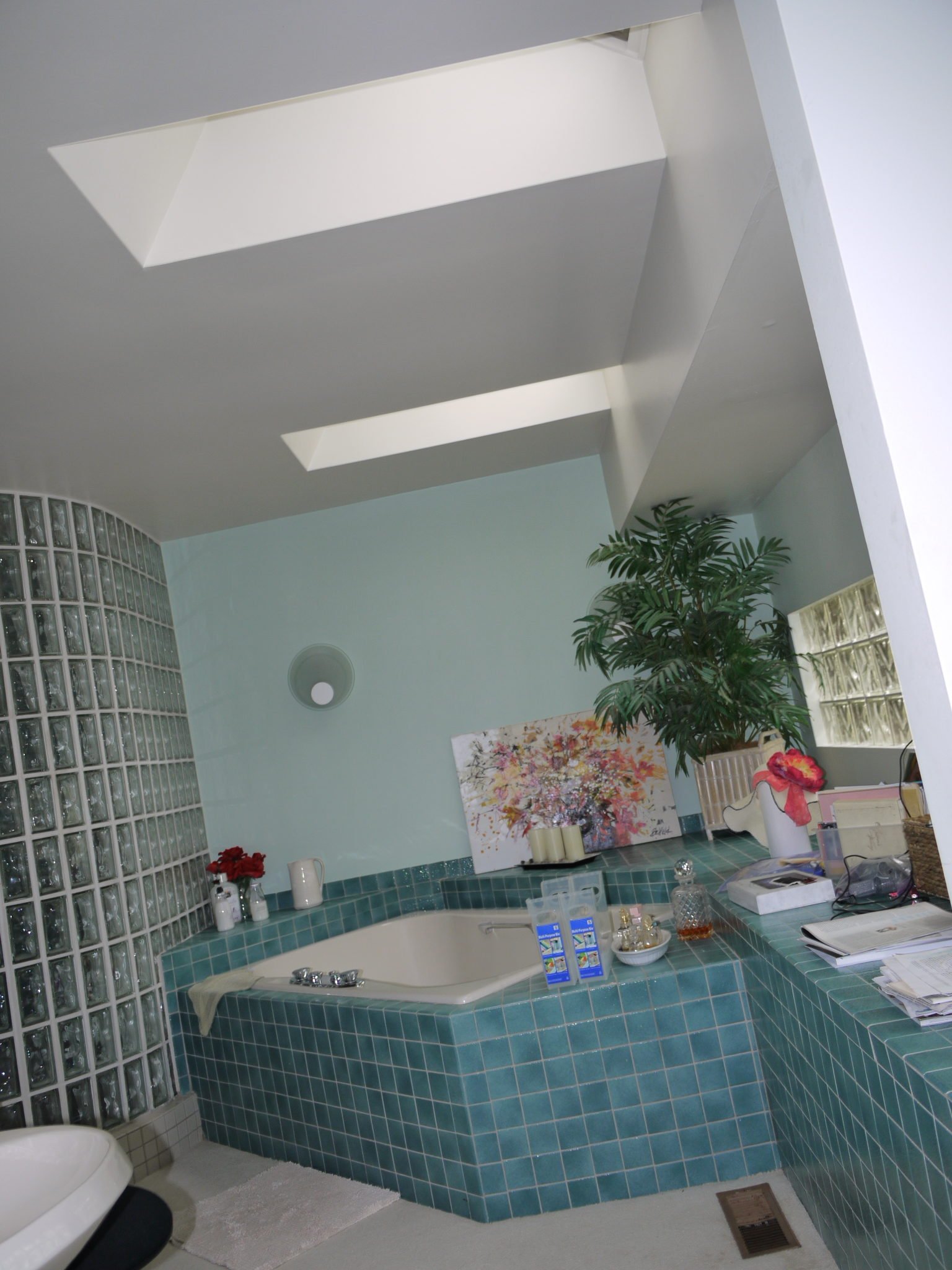 To capture that feeling in an otherwise new room, she brought in genuinely vintage touches, such as the towel bars and the prismatic-glass ceiling light. Other elements, including the tub sprayer and custom vanities, are modern-day recreations of antique pieces. Matte black hex tiles, brass library sconces, and a steel-framed shower enclosure with transom-style glass add to the industrial aesthetic.

One thing that didn’t need updating was the space’s ample natural light—Rill crafted the floor plan to work around the room’s existing skylights and windows. 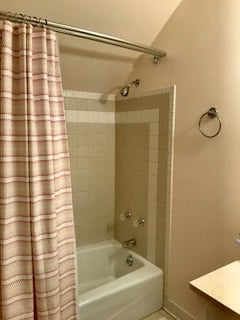 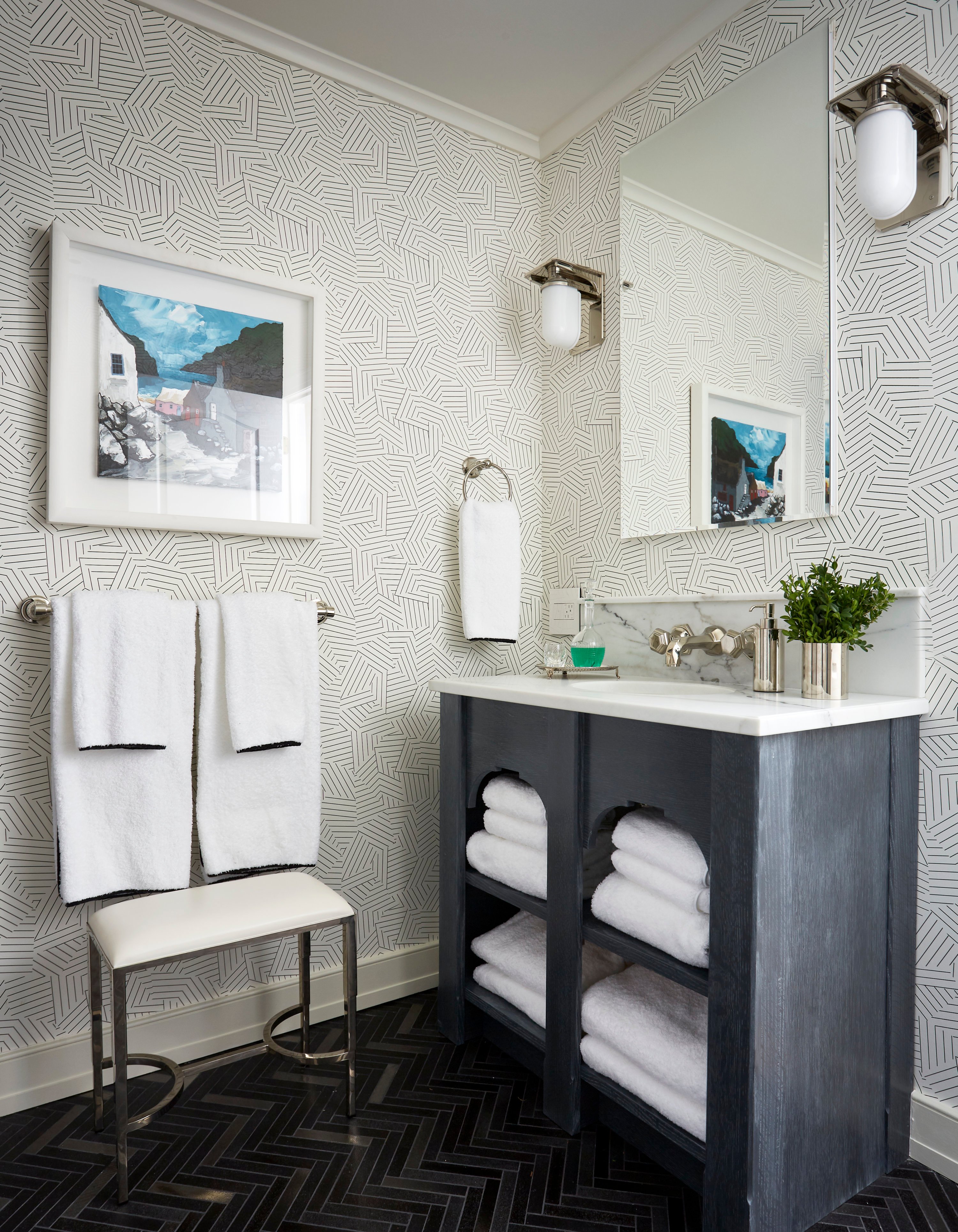 This modest-size guest space in Bethesda is proof that a bathroom doesn’t have to be gigantic to feel luxurious. In fact, its designer, Josh Hildreth, says he prefers to work on bathrooms of a more intimate scale because “you can treat them like a little jewel box.” In this project, all of the carefully considered details amount to a whole that feels straight out of a sophisticated boutique hotel.

Custom millwork creates cove-like chambers for the shower and toilet, visually separating areas that might otherwise feel crammed together. It was also an elegant solution for the fact that the plumbing couldn’t be moved. “When a toilet has to be center-stage,” says Hildreth, “you have to think, ‘How do we do this?’ ”

Linear-patterned wallpaper and a matching shower curtain, both in a print by Schumacher, make a big impact in such a petite space. So, too, does the black herringbone floor. “We’re layering patterns that make sense,” explains Hildreth. “I think pattern is a small room’s friend.”

3. Inspiration: A light and bright jungle. 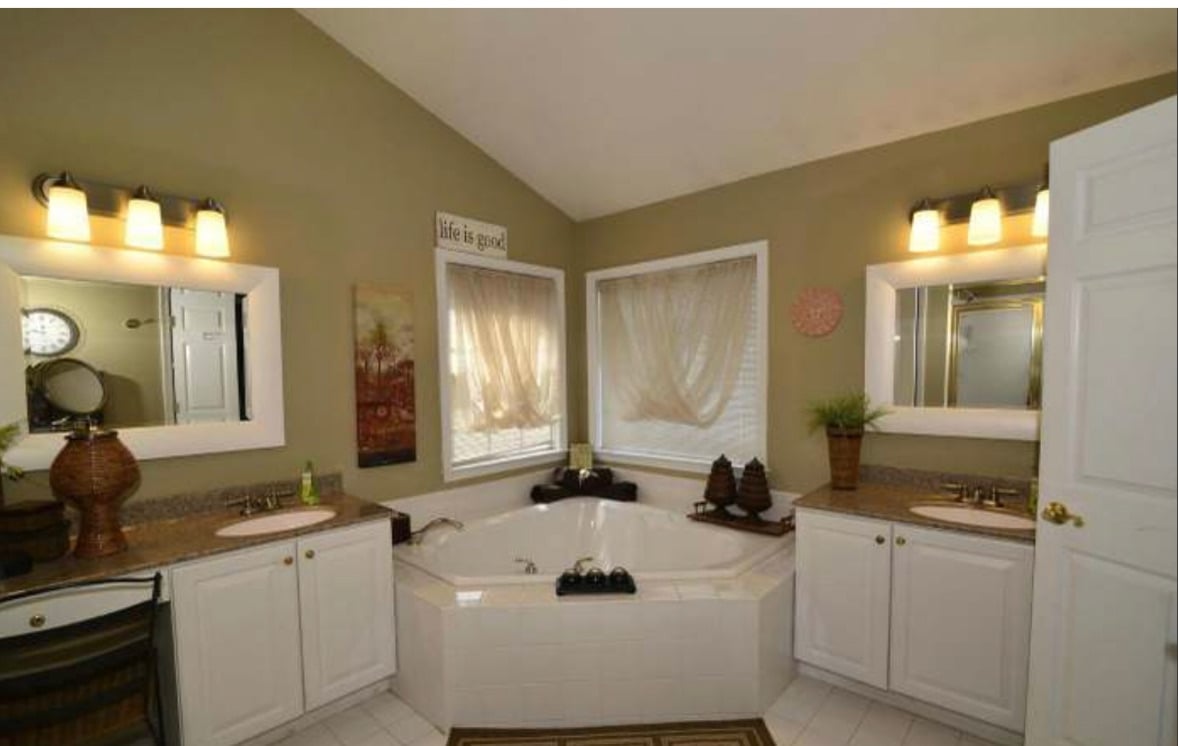 The owner of this bathroom—“a super-busy professional single mom of three,” according to designer Laura Hildebrandt—wanted a spot in her Ashburn house that felt like a vacation in a “light and bright jungle.” Well aware that such a directive could veer into cheesy theme-room territory, Hildebrandt opted to keep most of the space surprisingly subdued. A white vanity with a marble countertop, a modern freestanding tub, and a shower done in large-format white tile allow the real statement—Thibaut wallpaper in an abstract palm-frond print—to shine.

“Wallpaper gives a huge impact, and it’s not overwhelming in a bathroom space, because you don’t have a ton of wall,” says Hildebrandt. Plus it’s an easy way to take a design risk, because it’s not terribly difficult or expensive to replace. Especially during the pandemic, Hildebrandt says the busy mom has considered the bathroom her “oasis.” Adds the designer: “She says it’s the happiest space in her home.” 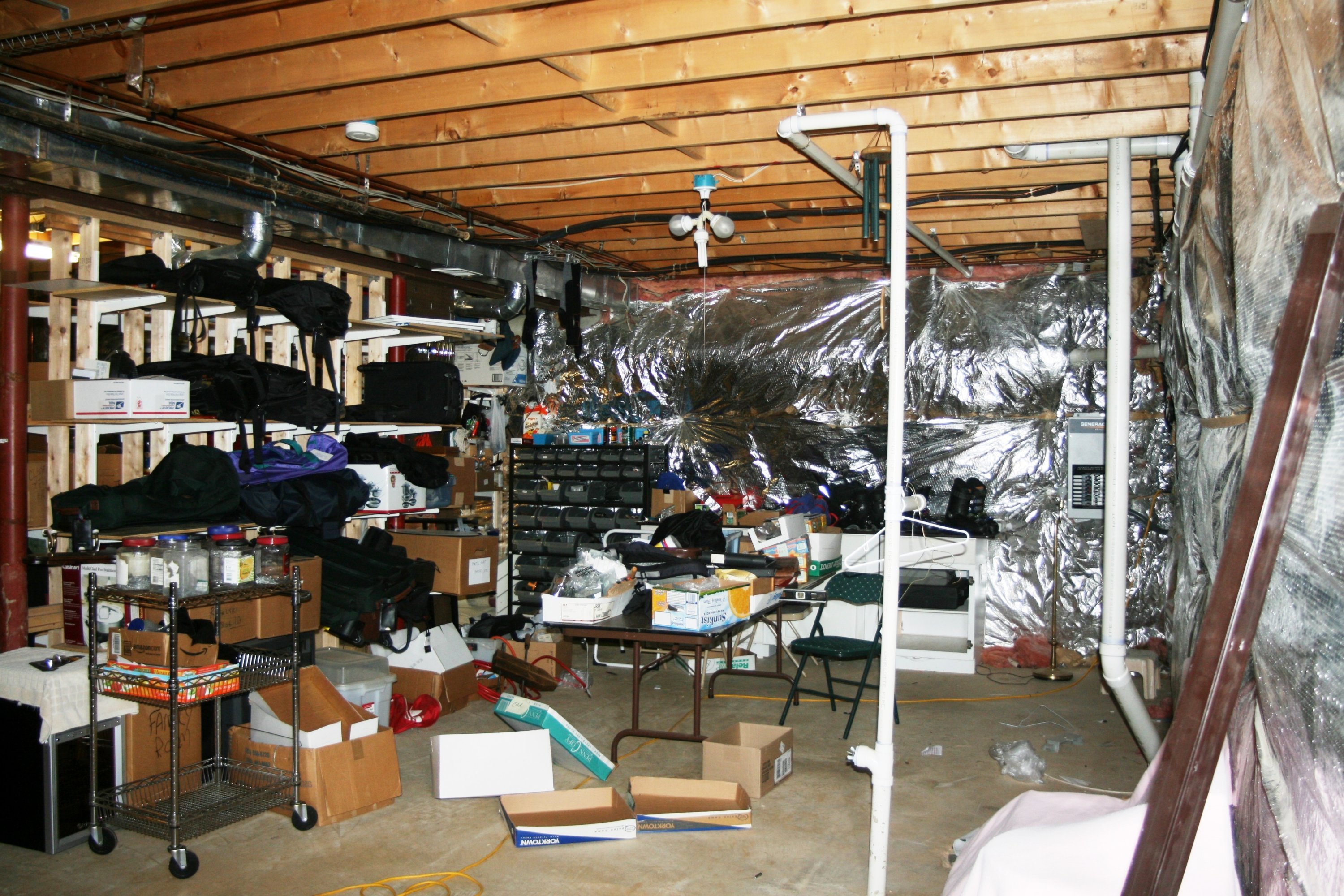 When a pair of McLean empty-nesters decided to transform the home where they had raised their family into a place where they would be happy retiring, they drew on their travels for ideas. For the basement bathroom, they asked architect Seth Ballard to evoke one of their favorite ski destinations: Timberline Lodge on Oregon’s Mount Hood.

Ballard thought he was shopping for the kitchen when he came upon a striking black-and-white soapstone slab. Its veining reminded him of snowy peaks, plus he hated the idea of cutting it up into countertops, so he suggested it for the shower walls instead. It now combines with the bathroom’s Mission-style oak cabinetry and wainscoting for a dramatic—but cozy—effect.

Though it’s windowless and clad in all-dark materials, the space doesn’t read as oppressive. “Sometimes there’s an inner light to things,” says Ballard, referring to the quartzite veining in the soapstone and the warmth of the wood. “You don’t always have to have light, bright things.” 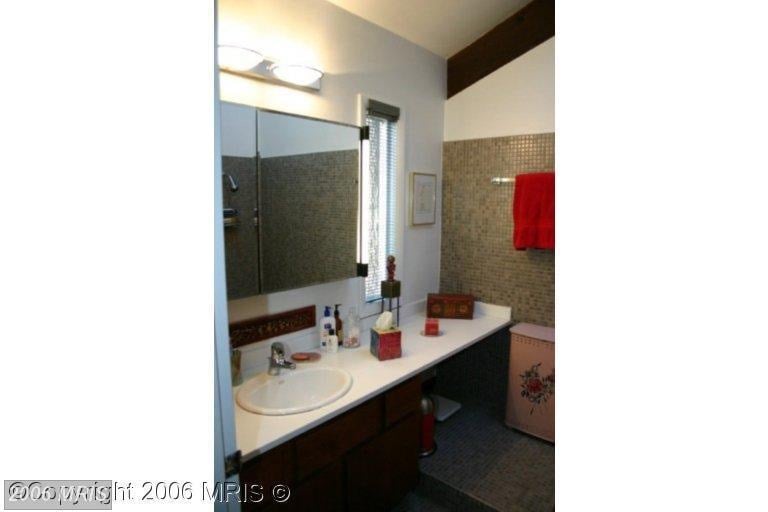 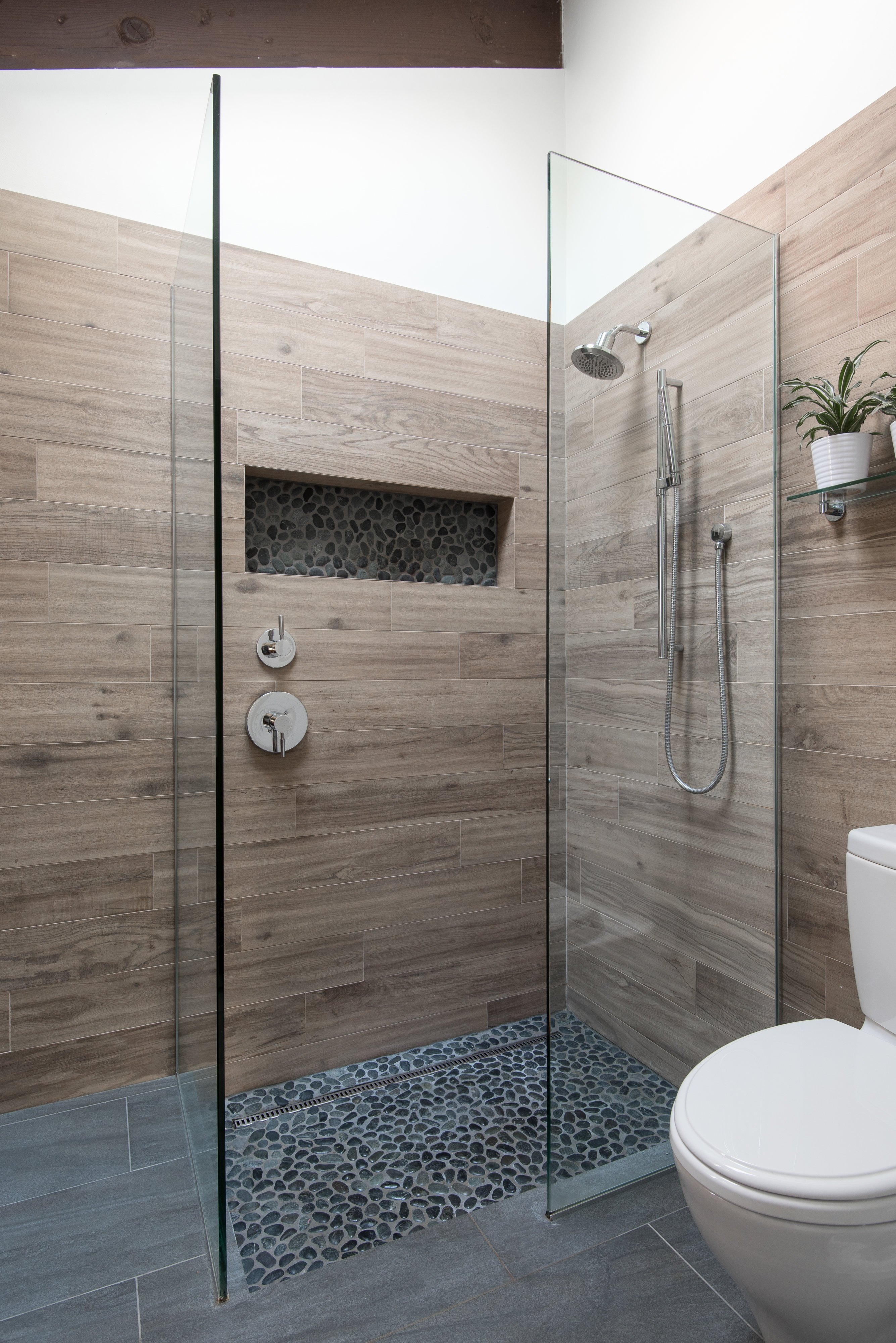 As tranquil as the space is now, it came about because of a decidedly non-Zen reason: a leaky 1970s tub. But what started as a nuisance was the push the owners of this modern Reston house needed to launch a full overhaul of their main bathroom.

That tub is now a shower that nearly feels as if it’s outdoors, thanks to the river-rock floor, faux-wood walls, doorless glass surround, and skylight. “It’s almost like a wooden sauna-slash-Zen spa,” says homeowner Kristen Chaddock.

Dean Turner of Evolution Design + Build led the renovation. He carried over the river rock to the sink backsplash and had the walnut floating vanity custom-made. Though the bathroom is brand-new, it nods to the home’s origins as a Ken Bonner–designed contemporary. The Res-ton architect was renowned in the 1970s for incorporating nature into his houses.

This article appears in the May 2021 issue.

Marisa M. Kashino joined Washingtonian in 2009 as a staff writer, and became a senior editor in 2014. She oversees the magazine’s real estate and home design coverage, and writes long-form feature stories. She was a 2020 Livingston Award finalist for her two-part investigation into a possible wrongful conviction stemming from a murder in rural Virginia.