Maybe it’s the siren song of social media. Or perhaps the last bastion of the design world is just in a place that you’d never expect. One thing’s for certain, though: Austin’s restaurant and bar bathrooms have become Instagram- and TikTok-worthy hubs complete with glittering hues, custom neons, and even disco balls animating every stall. Snap a selfie—or hell, have a dance party—inside five of the most eye-catching local loos. 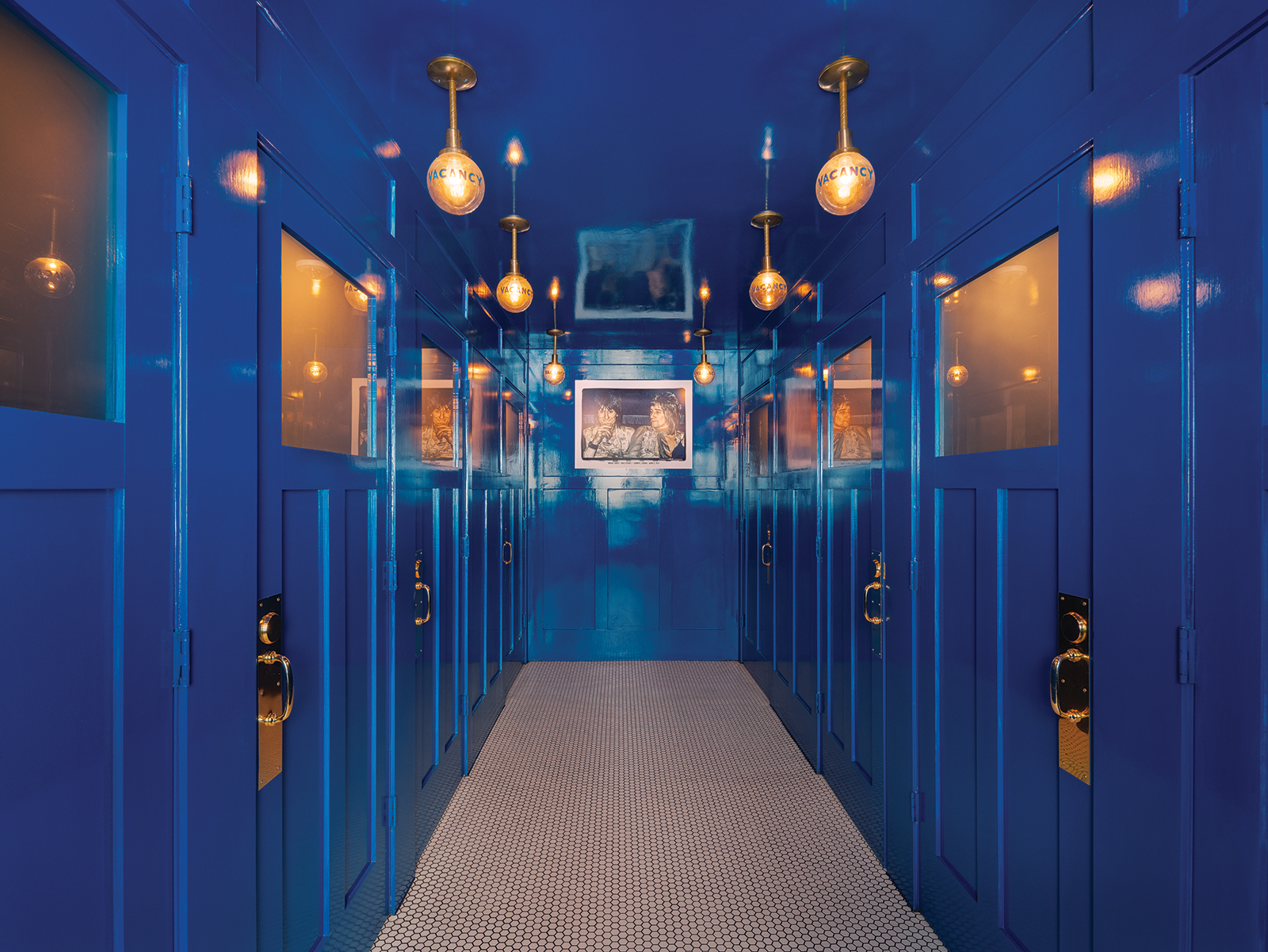 When this posh South Austin restaurant opened in September 2016, unisex bathrooms were still a rarity in Austin. “Five years ago, we were having to almost apologize to the older clientele, but the younger clientele was surprised and stoked,” says director of operations Jamie Wagner Rounsavall. Lead designer Mickie Spencer wanted the whole space to shine like a mirror, so she chose a gleaming style of paint and incorporated shimmering brass throughout the room.

The restaurant’s entire design was centered around its Cedar Tavern bar brought in from New York City, and the bathroom is also a nod to the bygone era when those bars were in vogue. Each stall has an illuminated old-school New York tavern vacancy light outside the door that turns off when you lock it.

The restroom is awash in Fine Paints of Europe’s Hollandlac Brilliant Paint in Dark Cobalt Blue. “The reason that it is so high gloss is because there are seven different stages of painting that you have to go through with this fine European paint style,” Rounsavall says. 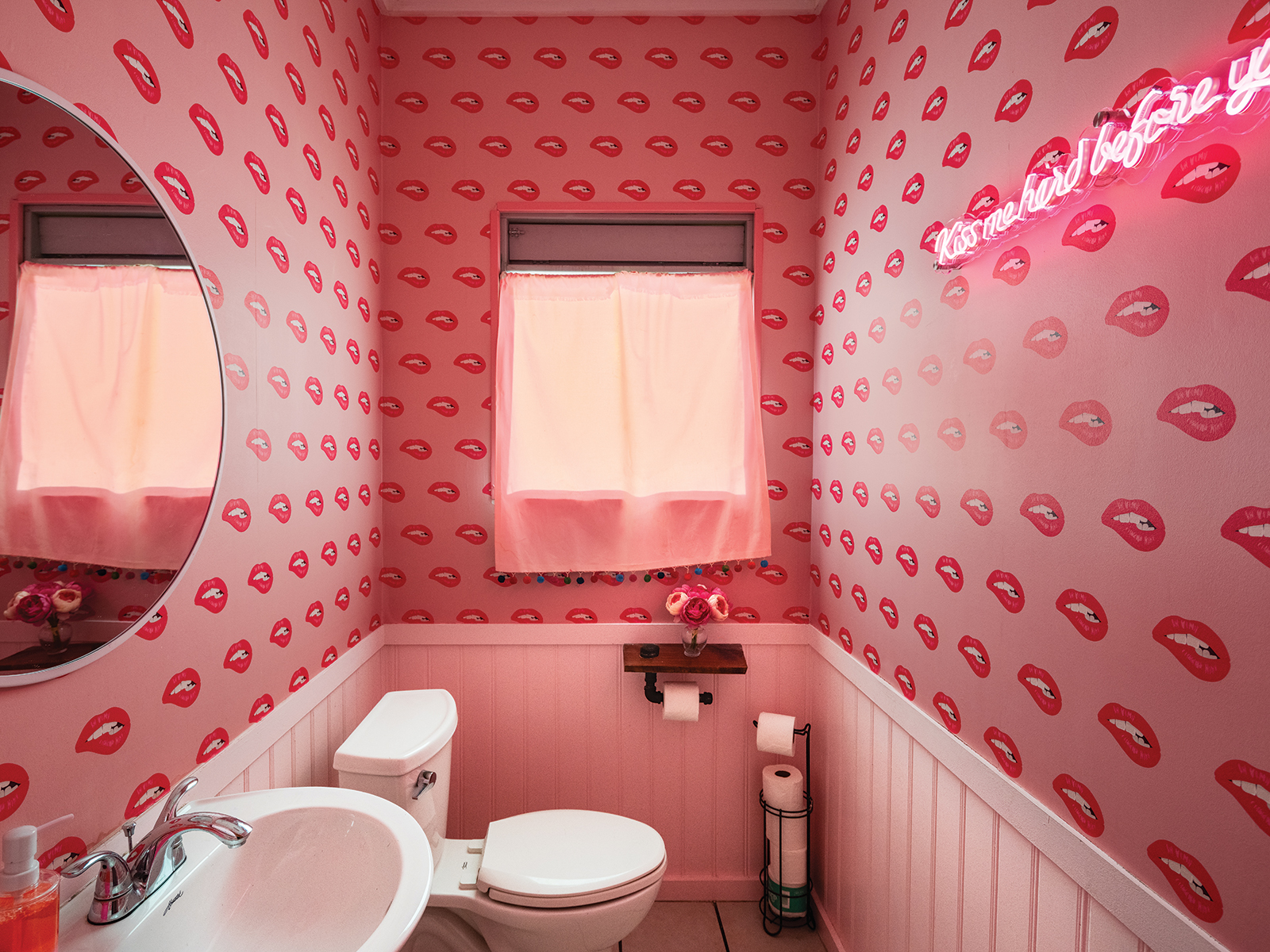 Gabriela Bucio isn’t afraid to go girly. Like Shelby Eatenton in Steel Magnolias, pink is her signature color. The owner of restaurants and bars such as Taquero Mucho and Mala Santa has the bright hue splashed throughout her concepts, including her newly acquired East Austin coffee shop. “It’s just such a feminine color, and I think it’s the color that’s most popular right now,” says Bucio, citing the enduring appeal of millennial pink. Because women tend to go to the bathroom in groups (and selfies are often involved), the restaurateur made the restrooms pink in all of her venues.

To keep the women’s room at Revival Coffee original, her restaurant group custom-designed the wallpaper to feature a biting lip motif. “The reason that we started designing our own wallpapers was because [competing restaurants] were buying the ones we had,” she says.

The lip image made Bucio think of the Lana Del Rey song “Summertime Sadness,” so she put its lyrics “Kiss me hard before you go” on a neon sign across from the mirror. 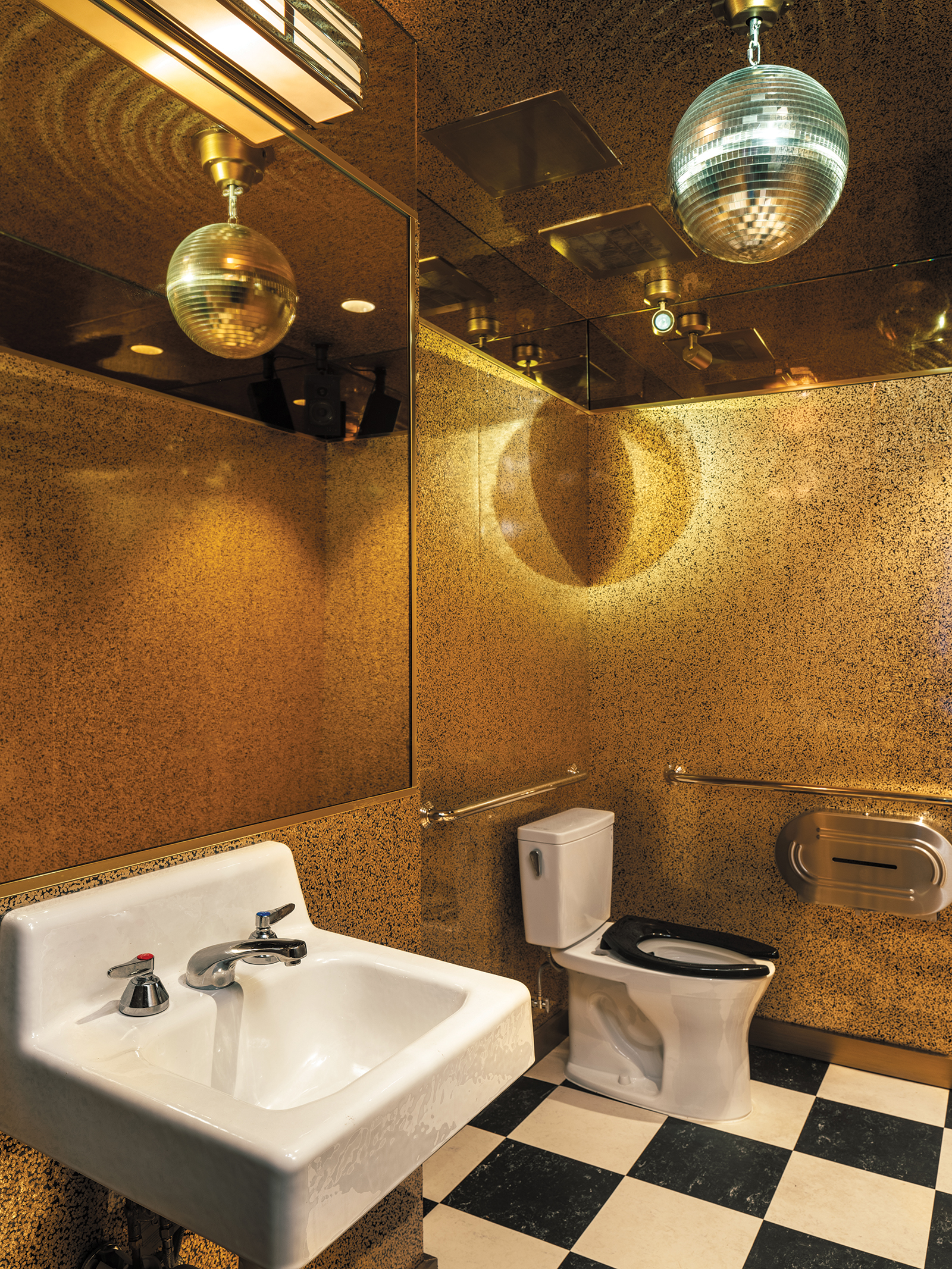 Converted from a 1930s liquor store, the latest concept from MML Hospitality is one of its most casual to date, due in part to its proximity to the bustling bars on West Sixth Street. Owner Larry McGuire says he wanted the vibe to reflect the type of downtown slice shop that you might find in a big city like NYC: “I’ve been a New York Mets fan my whole life (my family is from Long Island originally), so we did a fan boy–themed interior and wanted something crazy and fun for the bathroom.”

After going with gold-and-black confetti laminate on the walls, they decided to use a gold mirror at the lavatory and along the tops of the walls to emphasize the glow and disco ball effect, McGuire says.

The team at Lambert McGuire Design sourced a traditional old-school disco ball and wired it to a motor and sensor, so it starts moving the second someone enters the room.

The playlist for Favorite Pizza and its unisex bathroom is a high-energy mix of ’80s and ’90s hip hop, electro, soul, funk, and rock, from The Notorious B.I.G and Beastie Boys to The Gap Band. “Chances are, some of our customers might have had a few before heading our way, so spontaneous dance parties are likely,” he says. 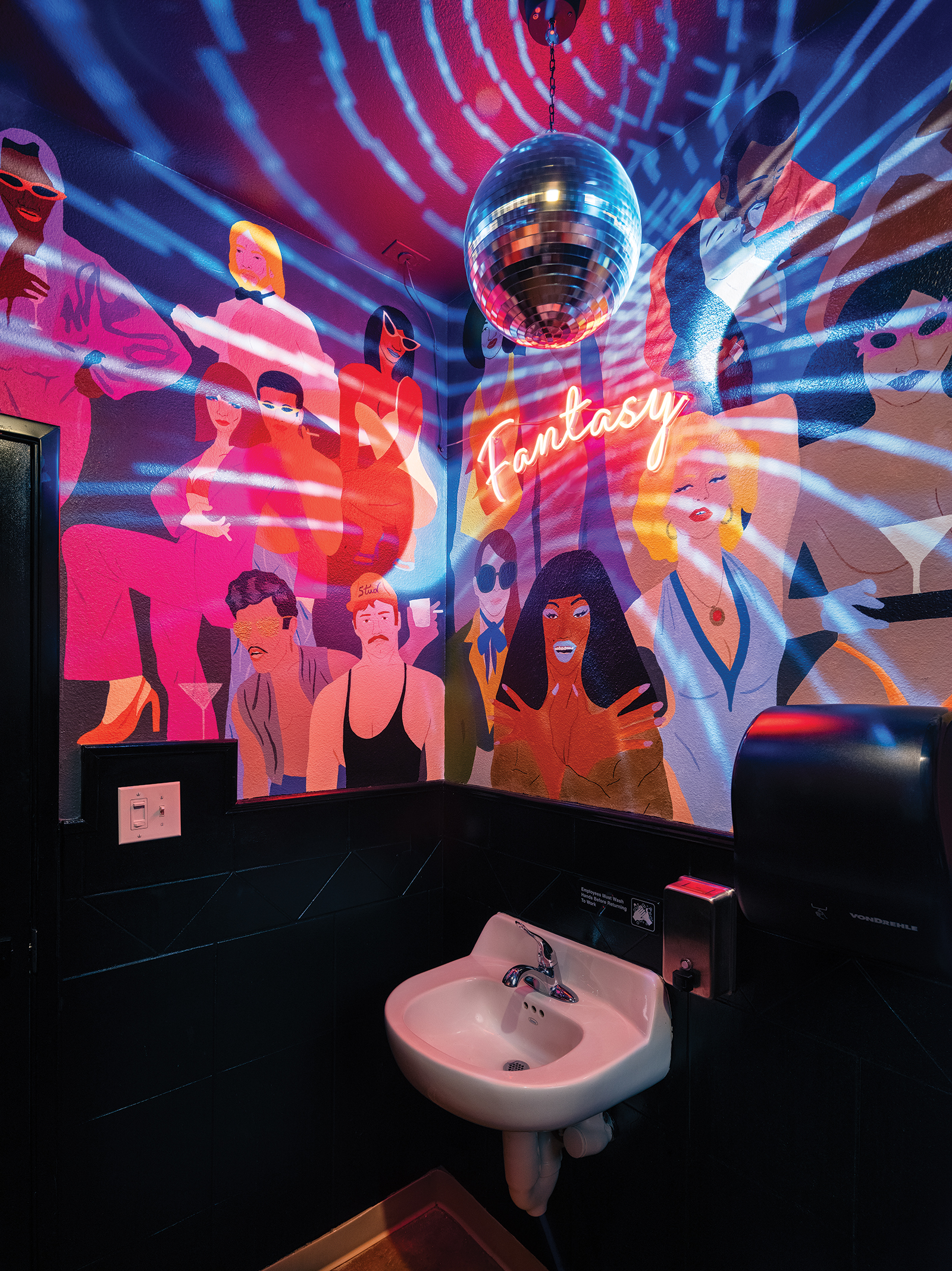 Who says disco is dead? The spirit of the ’70s is stayin’ alive in this whimsical bathroom designed by Xavier Schipani. The Austin artist and trans activist chose a Studio 54 theme to turn one of la Barbecue’s two new unisex bathrooms into a veritable throwback nightclub.

To create his mural, he projected images on the wall and used pencil to sketch them, then outlined them in paint and started adding in layers. Look closely, and you’ll find small details in the artwork from gold chains to a bag of cocaine.

The bathroom features a revolving disco ball, a neon sign that says “Fantasy,” and music from Spotify’s “Studio 54” playlist blaring through its Sonos speakers.

Schipani decided to draw 45 people, the reverse of 54. “There’s a Madonna, there’s a Grace Jones. He was just really pulling inspiration going back to photos of Studio 54,” says la Barbecue owner LeAnn Mueller. “The clothing, the time period—he comes up with little characters in his head and he paints them.” 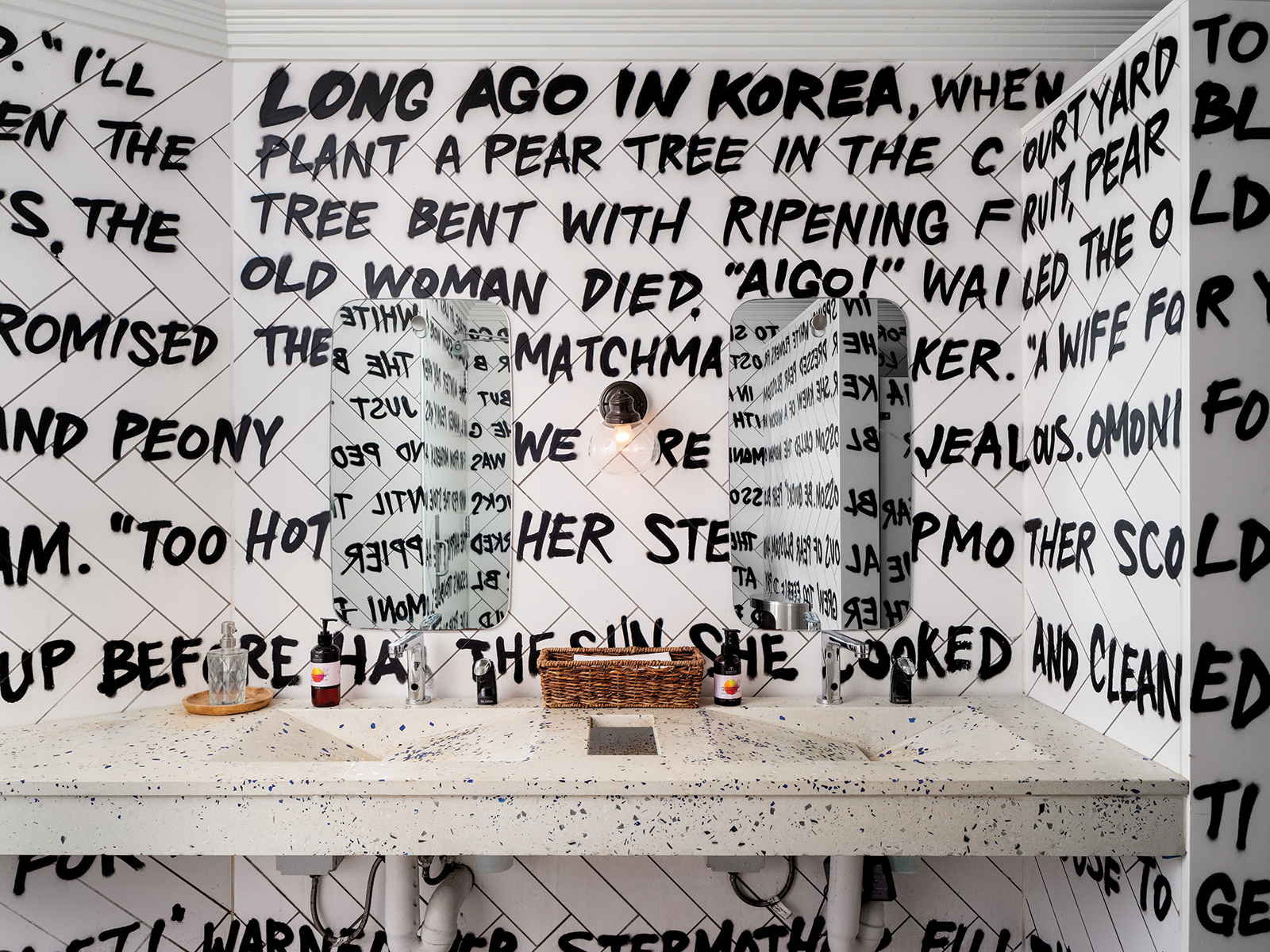 While envisioning The LINE Austin’s signature restaurant, designer Sean Knibb vowed to personalize the decor. “They were asking me questions about who I am and what my point of view through food was,” say Arlo Grey chef-partner Kristen Kish, who was born in South Korea. “I had mentioned that my mom would read me The Korean Cinderella growing up.” The fairy tale became the basis for the design of the men’s and women’s restrooms.

Both bathrooms highlight text from the book, which was written by Shirley Climo, on their white walls. Austin graffiti artist Efren Rebugio Jr. added the words using black spray paint. “He just started at one point in the restroom, circling around and writing the story,” Kish says.

Instead of playing music, the design team doubled down on the concept and included an audio recording of a woman reading the story in the chef’s native tongue. “We could link the music from the restaurant or from the lobby, but how cool would it be if over the speakers it’s a Korean woman reading that story, but in Korean?” Kish remembers thinking.